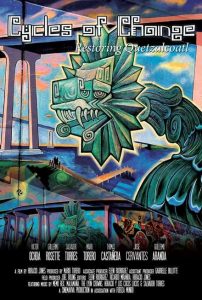 In honor of the 47th annual Chicano Park day, we are releasing 1000 promo codes to watch “Cycles of Change: Restoring Quetzalcoatl,” a documentary.  Learning some history about the park and it’s art will help you appreciate the day even more!

all lower case, one word for free rental or download until April 30th.

CinemaViva released Cycles of Change: Restoring Quetzalcoatl, a documentary about Chicano art and history in Chicano park, in 2016. Filming began in mid-2012 and the documentary captures the story of artists who carved their place in the city’s history by leaving their artwork behind in the park. The film focuses on the renovation of the park’s first mural Quetzalcoatl, a prominent figure throughout the 40-year struggle of the artists who persisted to rejuvenate the historic neighborhood. The crew interviews such prominent, pioneering artists, including Victor Ochoa, Guillermo Aranda, Salvador Torres, Mario Torero, Jose Cervantes, Thomas Castaneda, and Guillermo Rosetta.